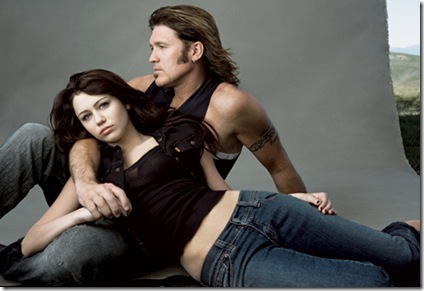 Billy Ray Cyrus you are such a vicarious crawdaddy. You love your daughter soooooo much. Yet, you respect the father daughter relationship. So what can you do? You live vicariously through your daughters romances. I mean we know you cross the line; not wanting Miley to cut her hair or change her teeth. Also, why do you care so much about Miley's teeth? Mmm mmm.

Now, some of you may think we are wrong for this but riddle me this Batman. Why did Crawdaddy think it was ok for Miley to dance on a pole at the Teen Choice Awards? Bitch is still underage. On a side note, why is Miley such a slut? We think she has taken lessons from Kate 'Herpes' Hudson. Betcha that Miley will be visiting the local clinic real soon. I mean she already is sang about in songs by Drake and Lil Wayne. Damn and thats some shit. Singin about Miley's fug face. But shmanyways, now we're just being mean.

This is about Billy Ray Cyrus. None to some backwoods bitches as 'Get N Dem Pants Cyrus',you nasty ass hoes. Well, what you may not know is that Billy Ray is a secret hoe. I mean he was married two times but supposedly was still getting some ping pang. He is also a baby's daddy.
He is married to Tish Finley. They have three children including Miley. He also has another kid named Cody. He is the same age as Miley but mom is unknown to us assholes. Also, he has two adopted children. Adoptive children are the best!!!!!!! Seriously, we recommend it. I mean argh sooooo much better than Miley.
Oh well our Achy Breaky heart can't talk about this Vicarious Crawdaddy anymore. We all know the truth, ruth. The truth is, he cant have it so he will imagine it. We kid. Just the hardy ha ha ha's. Can't you take a damn joke. Nah, we're serious

Posted by Bernice Vivian Winters at 6:32 AM