Oh Tommy How big is your Johnny 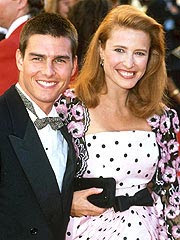 
Tom Cruise oh boy oh boy. We haven't wanted to tackle this guy for fear that our site would be destroyed in seconds. This crazy mofo gives us the Jeepers Creepers. What this man has done for the word crazy is what Angelina Jolie has done for the term dick sucking lips...it's what alcohol has done for getting panties to drop. Meaning dude is CRAZZZZZZZZZZZZZZZYYYYYYYYYYY.

Tommy was once the underling. He was the desire of Cougar Mimi Rogers. Poor Mimi, Tommy wouldn't have sexual relations with her. He supposedly wouldn't do her because he wanted to become a monk. HAHAHAHhahahahahhhhhahahah we said hahahaHHAHAHAHAahahahahahaha. What a total douche. Really. Mimi is quoted for saying that 'He thought he had to be celibate to maintain the purity of his instrument, but my instrument needed to be turned so we had to split'. So, hooker left him. We like this tart! Word up Mimi. Then he gets lucky and gets the Aussie. She is one of the Original forehead Queens, Nicole Kidman. WOOWeee I mean her forehead is so big you could watch a movie on that shit. Fuck, serve a dinner on that forehead. Can someone pass the potatoes?

Shmanyway, he spent a long time with this one. They adopted babies. They starred in movies together. I mean do you guys remember Far and Away? God stab my beaver why don't you. Thank god for Kubrick otherwise they'd have a triple dipple of duds. They attended award ceremonies, parties, and scientology meetings. Bet she hated that. Can't get those years back. Eyes Wide Shut indeed.

Oh, then there was the Cruz Cruise. I really hated this couple. Jeez, when I think of those times I feel like my ass is being ate out by Zombies. It's just a horrible feeling.

Then he met Katie Holmes. GROSS! Katie is 17 years younger than Tommy I'm sure he is thrilled with this. He can control control control. She be his little puppet. I mean bitch is already wearing mom jeans.

One of my friends Brandi is holding out hopes that Katie will get back to her senses. I doubt it, YO! HolmeGirl would need Dawson for that. Bitch want get to her senses until that clicker gets taken out of her Cerebral  Cortex but I digress. They spawned Suri Cruise who must be the girl version of Damien. She is cute but looks like she could will you to drop from a balcony. She could force you to buy her a stuffed toy while eating your bbbrrrraaaaainS.

Where will Tommy go next? What Will Tommy Do? WWTD? Fuck we don't know...take down our website, sue a hoe, jump on some couches, only drink pee? WWTD?
Posted by Bernice Vivian Winters at 10:43 AM