I Got 99 problems and my small dick is one

Jay Z is the most paid, acclaimed, richest, and fugliest rapper alive. I mean he brings the jams, fa realz! But DAMN, he sure is fugly. Somehow he is pulling the coolest, the most badass chick in the game, Beyonce. Jay Z is 38 and Beyonce is 27. Hmmmm how did this pair come to be? It came to be because Beyonce is still a little hood. Yeah Yeah, you white folks all love Beyonce, but bitch has still got a little Yaki up in her. Do you even know what Yaki is? Shmanyway, Beyonce worked and twirked all that booty onto Jay so much that man was begging to put that $5million Lorraine Schwartz ring on that finga.

Who'd a thunk it? I mean Jay was notorious for all the girlsssssssssss girlsssss girls that he was fucking. I mean let's go through some of the list: Blu Cantrell, Rosario Dawson, Charlie Baltimore, Trina, Carmen Bryan, Shenelle Scott, Amil, Karrine Steffans (yeah you know her ass Supa Head), and some other nameless hoes. You know the girls runnin up after the show with booty pants on, boobs all out, and Rapstar wishes and cookie dreams. These hoes need to just go and bake some Toll House...like me.

But back to the doodoo, Jay needs to have that bank, that street cred, and those skillz because we all know that B wouldn't have given that nigwah no love, no dubs, no hugs, no virgo beef curtains because she HAS to be stuck the FUCK up. Come on now. You guys know. I mean seriously imagine Beyonce Knowles in high school. I can imagine stabbing her in the hand with a pencil right now. Damn, I bet she caused some super ghetto fab bitch to knock her out by the lockers before third period. Mmmm hmmmmm. Amen 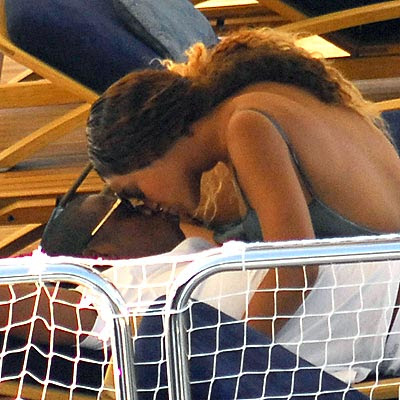 I guess to get to the moral of this Beauty and Beast Crawdaddy Saga is GET SOME MONEY, HONEY!!!!
Posted by Bernice Vivian Winters at 8:26 PM